Yesterday I finally made it to my first #UKVMUG. They have been running for five years but each time they have happened I’ve been unable to attend either due to having attended VMworld so also attending UKVMUG would be pushing my luck or I couldn’t motivate a day not billing time to a customer. This year I didn’t attend any VMworld’s so made sure I booked out the day to attend and I’m really glad I did.

My day started a bit later than most attendees as I had to drop off my daughter at nursery as it opened and then drive the 93 miles to the Birmingham motorcycle museum where the UKVMUG was being held. I unfortunately missed the keynote by EMEA CTO Joe Bagueley as well as my mention alongside colleague Sam McGeown for our achieving of our VCDX’s and the award of shirts until our vouchers for the official VCDX shirts come through.  Thanks to Alaric and the rest of the UKVMUG crew for printing this for me =0)

I then spoke to quite a few fellow London VMUG attendees as well as peers from twitter and was very very appreciative of all the VCDX congratulations from so many of them.

I then attended a discussion by Zerto all around their offering and what has been released in their new version. A really great product and very interesting alternative to VMware SRM and vSphere Replication.

I then attended a session by two current and one ex Xtravirt employees around finding the silver lining in vCAC/vRA projects and the sharing of their war stories. Certainly some really great advice from the guys and the most important bit of advice around integrating tests and error reporting into your vCO/vRO workflows from the beginning.

It was then lunch time where again I spoke to a number of current and ex colleagues as well as fellow London VMUG regulars as well as fellow vBrownbag host (albeit he is on a sabbatical from it at present) Josh Atwell. Mike Laverick then did his swag bag raffle that he does every year in aid of charity which this year had raised £470 and the winner was Sean Killen. 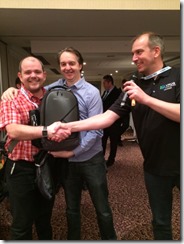 After some talking shop with some vendors I made my way to the “VMware’s Virtual SAN: A technical Deep Dive and Product Roadmap buy Christos Karamanolis and Lee Dilworth. the session was very interesting and Christos certainly gave in-depth explanations around VSAN, I just wish they had spent more time on the roadmap and new features in the releases due in Q1 next year.

Next was a session by Frank Buechsel who is one of my fellow EMEA vBrownbag co-hosts who presented all around vRealize Automation-Lessons Learned. To say Frank didn’t sound like a big fan of vRA and the sheer complexity of getting a production setup working (tell me about it I’ve spent the last year of my life doing this) would be an understatement and I actually asked him at the end if he had anything nice to say about vRA which he did say it is a brilliant product but the errors are far too vague and the start-up and shutdown orders of a distributed installation are a nightmare.

Doing the closing keynote was then the illustrious John Troyer. It was a brilliant keynote all around how to try architect your IT career and how you need to keep learning new skills as the skills you have now will most likely be replaced/redundant in less than ten years. Poor John did seem to be suffering from a cold and jet lag but gave great advice. It was also great to hear a mention of the vBrownbag in his discussion. Thanks for that John 🙂

Then it was the aptly named “The Red Wedding” ( G.o.T SPOLIER ALERT!! ) section of the day where Jane Rimmer, Alaric and Stuart all announced they would be stepping down as leaders of the London VMUG and UKVMUG after 25 years of service between them to allocate more time to their jobs and hobbies. These three have been amazing in building the community and dedicating so much of their time to the user group. Simon Gallagher hasn’t stepped down so that’s one consolation from it.If you think you could dedicate the time and are interested in becoming a leader then there is a survey available to complete as part of the process. this closes next Thursday so get your interest in ASAP.

Last but not least Pietro Piutti was generous enough to bring me over a few bottles of beer from the only certified trappist brewery in Rome. Not sure about the eucalyptus they add but man it was good. Not a Westvleteren 8 but it still got 4.75 out of 5 on untappd 😀

It was a brilliant day and I certainly will be aiming to attend again next year even though I plan to attend the US VMworld next year also.